Ah, the mighty World of Warcraft. One of the greatest online RPG’s ever invented. Millions of players worldwide, massive immersive environments to explore and fight in. And now, its all in the palm of your hands with the World of Warcraft Trading Card Game (TCG). Arguably one of the most fun, diverse card games ever made, WOW TCG was developed first by Upper Deck Entertainment, and then taken over a few years later by Cryptozoic. With over forty expansions, special raid sets, collector’s sets and more, there are tons of cards to collect and play with in this great game! One of the most popular features of this game, besides pulling epic cards such as Jaina Proudmore, Magni Bronzebeard, Garrosh Hellscream, Warchief Thrall and more, are the loot cards, which give you pets, toys and even mounts that can be used in the online World of Warcraft MMO. The later booster boxes and packs of this game came with an unprecedented 19 cards per pack and 36 booster packs per box, adding all sorts of new weapons, characters, abilities, mounts and monsters to your deck building ability! One of the funnest, most well developed trading cards games to ever hit the market, enjoy the WoW TCG! 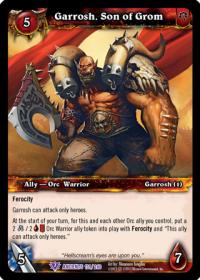 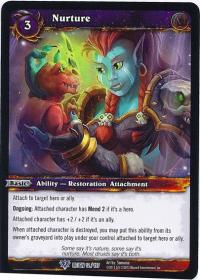 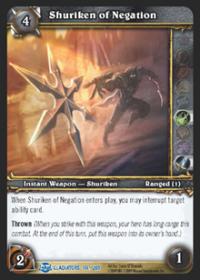 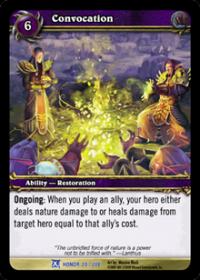 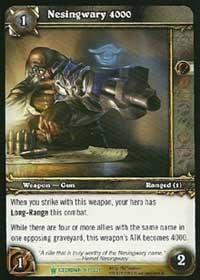 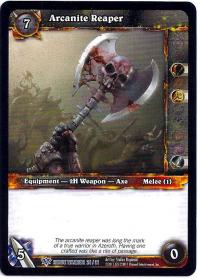 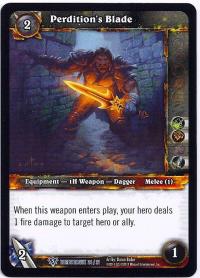 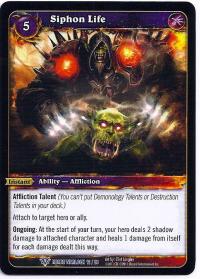 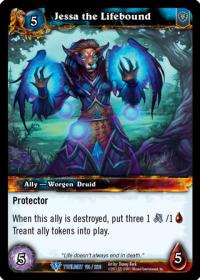 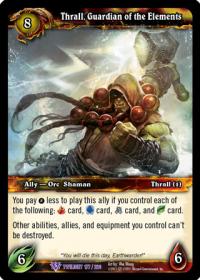 Thrall, Guardian of the Elements

Betrayal of the Guardian

War of the Ancients

Tomb of the Forgotten

Crown of the Heavens

Crown of the Heavens - Foreign

Throne of the Tides

Throne of the Tides - Italian

Throne of the Tides - French

Twilight of the Dragons

CCGCastle has the worlds LARGEST selection of World of Warcraft TCG. As one of the first suppliers ever to offer the game for sale, we stuck with it even after the game went out of production in 2013. The game is made up of expansion sets, special raid sets and more. It all started off in 2006 with the first set - Heroes of Azeroth. Players create decks based around one of eight different classes, add cards that supplement those decks, and summon powerful allies to help you fight! Soon after Heroes, special Raid Deck sets were released - Onyxia’s Lair and the Molten Core. Both allow groups of friends to team up against epic monsters, fight them to the death, and take possession of a special loot pack included in each deck! Speaking of loot, World of Warcraft TCG sets all have special loot cards randomly inserted into packs - cards with codes that you can take online and enter in the real MMO to receive rewards, mounts, pets, toys, trinkets and more! Another added bonus to this great game! Those lucky enough to find a rare Spectral Tiger Mount loot card will be rewarded with one of the most epic mounts in the game. Sets in the World of Warcraft TCG take on various aspects of the MMO, to enhance your gameplay. Cards from sets like Scourgewar and Wrathgate have some of the most powerful spells and epic heroes in the game - like Thrall, Tirion Fordring, Kel’thuzad and more! Older sets like The Hunt for Illidan and Servants of the Betrayer focus on the Prince Kael’thas and Black Temple time period of the game. Newer sets like Worldbreaker include everyone’s favorite - goblins! Reign of Fire, War of the Ancients and Betrayal of the Guardian, some of the last sets produced, have some epic allies and heroes as well, including some great weapons - Atiesh, Doomhammer, Frostmourne, Medivh the Prophet and some surprise demons and monsters. Dispersed throughout the life of the game, Class Decks and Champion Decks also allow players to enjoy alternate experiences as they pick up pre-constructed decks, to play and battle with their friends. With the largest selection of cards, promos, foils, packs, boxes and even loot cards in the world, you are sure to find what you need at CCGCastle!